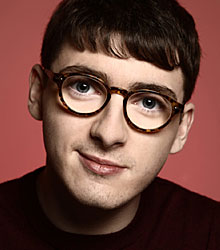 Jack Carroll starred in CBBC sketch show ‘Vic Reeves Ministry of Curious Stuff’ aged 11, won a Pride of Britain award at 12 and was runner-up on Britain’s got talent aged 14. What he did when he was 13 remains a mystery.

Since then, he’s made stand up appearances on Live at the Apollo and Sunday night at the Palladium and Frankie Boyle’s New World Order.

Jack’s start on the road to public awareness came when he was brought to comedian Jason Manford's attention, having seen a video of Jack performing at his parents' wedding anniversary. At Jason Manford's invitation, Jack gave a short performance at the start of his live show in front of more than 1,400 people at St. George's Hall in Bradford.

The performance was featured on a segment of BBC One TV series The One Show. Jack also performed with Jason Manford again in June 2013 at the Victoria Theatre in Halifax.

Jack, who suffers from cerebral palsy, often uses his disability as a vehicle for many of the routines and gags in his act, and has been praised for not letting the condition affect his aspirations and goal of being a professional comedian.

And as mentioned, in 2012, Jack Carroll was cast as Mr. Frazernagle in Ministry of Curious Stuff on the CBBC Channel, which starred fellow comedian Vic Reeves, and has appeared in two series of the show.

He has also acted in 4 series of Sky 1 Sitcom Trollied and starred in feature film Eaten By Lions. As well as acting and stand up, he’s a sought after writer with a number of projects in development at some of the most well respected production companies working today.

His other attributes include an amazing ability to write about himself in the 3rd person, his brilliant intellect, and his modesty.

How to book Jack Carroll for your event