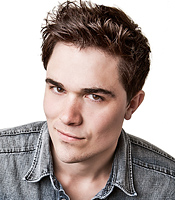 Named in Red Pages' HOT 100 list, Ivan Berry is a presenter from London, who has built himself a reputation for intelligent in-depth interviews - with a cheeky charm! He has conducted over 1000 interviews with some of the biggest stars on the planet.

As the face of 'Virgin TV - Music On Demand' and Virgin TIVO's new customers campaign, Ivan has interviewed artists including Kasabian, Jess Glynn, Childish Gambino, The Vamps, Ed Sheeran and Katy B, just to name a few!

He is also the face of 'SUB TV', an interactive online television channel and cable network which broadcasts to 96 universities across the UK, reaching over 1.75 million viewers a week! Ivan hosts Over Exposed and writes, produces and presents Show Us Your Hits, topical music shows on Sub TV. Ivan has interviewed a wide range of guests such as Little mix, Joss stone, Half Moon Run and Delta Goodrem, and recently fronted the National Rail Show Us Your Hits programme special broadcasting nationwide.

Ivan's live and corporate work includes the All In For events for Adidas, where he has interviewed sports stars such the All Blacks, Chelsea FC manager Jose Morhino, Olympic gold medallist Jessica Ennis and footballing legend Alan Shearer. He hosted the grand opening for the new 'Westfield' shopping centre in Surrey, is the ongoing presenter for the 'British Gymnastics - Gymfusion', and is the match announcer and presenter for 'Fulham TV', the official channel for football team Fulham FC.

You can also catch Ivan talking all things movie related for Shorts TV on The Short Movie Channel, broadcasting across Europe, the Middle East and Africa.

Previously Ivan fronted online show 'Transmission Live'; an hour long programme where he conducted interviews with the likes of Tinie Tempah for live transmission on MTV and Nickelodeon's online platforms. He has also presented the music and youth show 'Balcony TV', hit the red carpet for 'Yahoo Celebrity', fronted 'The Coffee House Sessions' as well as one of the biggest and most respected online shows around: 'Secret Sessions' - now in partnership with YouTube.

Interviewing and presenting aside; Ivan has a strong, eclectic voice over experience which includes voicing for: Audi, Argos, Redward, Spotify and D&G.

How to book Ivan Berry for your event