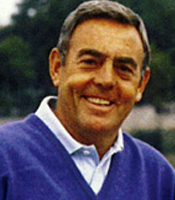 Ian St John was Liverpool's record signing when brought from Scottish club side Motherwell for £37,500 and would soon settle into a successful Liverpool side under the guidance of Bill Shankly and partner Roger Hunt. During his time at Anfield, Liverpool won 2 domestic championships and the club's first FA Cup against Leeds United in 1965, where Ian scored the winner with a diving header.

St John's arrival at Anfield marked the start of the club's rise to pre-eminence in English football, where Ian was the attacking spark the team had been waiting for. In later seasons St John would play a deeper midfield role, giving him a platform on which to show his all-round abilities. After an exceptionally successful career as a player Ian went into club management before moving into the media.

As well as playing golf (handicap of 13) Ian also runs a highly successful soccer coaching school for young players (Ian St John Soccer camps). Other hobbies include travel, gardening and reading as well as being a keen sports watcher.

Ian St. John is a highly sought-after orator and in-demand as an after dinner speaker with his insight and knowledge of football, from Bill Shankly to modern Premiership football. Ian's style of speaking is both informative and anecdotal with a lot of humour, additionally he is available for golf days, corporate seminars and personal appearances.

Clients often ask about purchasing books for giveaways and delegate packs. Below you’ll find a selection of products by Ian St. John. Click the images to view on Amazon's website. For bulk orders, please speak with your Booking Agent.