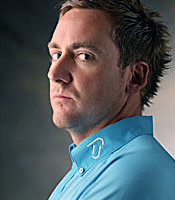 Ian Poulter, probably best known for his sartorial style, including, in 2004, wearing striking Union Jack trousers at the British Open, took his first golf shot when he was just 4 years old when his single-handicap father, Terry, gave him a cut-down 3-wood. He is now a member of the world's top two professional golf tours, the US-based PGA Tour and the European Tour.

Unable to get a place as a pro at a private club, Ian became the assistant pro and golf shop manager at the Chesfield Downs Golf Club. There he was forced by his boss to pay a full green fee every time he wanted to play in a competition. His handicap hence stayed at four, because he did not play in competitions.

Coached by David Leadbetter, Ian turned professional in 1996 aged 19, gaining his first win at the 1999 Open de Cote d'Ivoire on the European Tour's second tier Challenge Tour. In his first season, he claimed the Italian Open title and was the Sir Henry Cotton Rookie of the Year for 2000. Further wins followed in each of the next four seasons, most prestigiously the season ending "tour championship" the Volvo Masters in 2004. He was in the top ten on the Order of Merit in 2003, 2004, 2006 and 2009. In 2010, he finished 4th on the Order of Merit, his highest placing so far.

After narrowly missing a place in the 2002 European Ryder Cup team, Poulter was a member of the victorious squad in 2004, where he officially scored the winning points for his team. This entitled him to take up membership of the PGA Tour in 2005, and he has divided his time between the two tours since then.

At the 2008 Masters Tournament, Poulter made a hole-in-one at the 16th hole at Augusta National in the first round. At the 2008 Open Championship, Poulter had the clubhouse lead on the last round before being beaten by defending champion Pádraig Harrington. In the 2008 Ryder Cup, Poulter was the highest points scorer on either side as he scored 4 of Europe's 11.5 points.

Ian Poulter moved into the top-10 of the Official World Golf Rankings in January 2010 with a second place finish at the Abu Dhabi Golf Championship. In February 2010, he won his first tournament on US soil, beating fellow Englishman Paul Casey 4&2 in the final of the WGC-Accenture Match Play Championship in Arizona. The win moved him to 5th in the world rankings. In November 2010, he won his second title of the year with a one-stroke victory in the UBS Hong Kong Open.

Ian Poulter is well known for his eccentric dress sense, inspired by his mother who managed the Letchworth branch of UK women's fashion chain Dorothy Perkins. His most famous pieces include trousers featuring the famous Claret Jug, worn at both the 2005 and 2006 Open Championships. He will also often match his sunglasses to his shirt and hat colour, in addition to wearing brightly coloured and patterned trousers. Ian uses Saville Row tailor William Hunt and, in 2005, the design for his trousers for the British Open were made into a competition by the BBC and attracted around 2000 entries.

Ian Poulter is married to Katie; the couple have four children, and divide their time between Orlando, Florida and Milton Keynes, Buckinghamshire.

Clients often ask about purchasing books for giveaways and delegate packs. Below you’ll find a selection of products by Ian Poulter. Click the images to view on Amazon's website. For bulk orders, please speak with your Booking Agent.

How to book Ian Poulter for your event