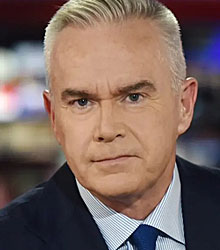 Huw Edwards is known to millions of viewers as main presenter of the BBC's flagship 10 O' Clock News, Britain's most popular television news programme. In 2009 the show picked up the prestigious RTS award for News Programme of the Year.

He joined the BBC over twenty five years ago, and has presented a wide range of programmes, including Newsnight, Panorama, and the 6 O' Clock News - and has co-hosted two General Election programmes on Radio 4.

Huw is the BBC's voice at Trooping The Colour, the Festival of Remembrance, and the State Opening of Parliament. He hosted the BBC's major coverage of death of Pope John Paul, and the election of Pope Benedict. In 2004, he anchored the coverage of the 60th Anniversary of D-Day.

In 2005 and 2006, the Ten O' Clock team received two prestigious awards from BAFTA, and one from the Royal Television Society. Most recently Huw anchored the BBC coverage of the 2008 US Elections and the historic inauguration of Barack Obama in 2009.

Huw spent over a decade reporting politics at Westminster, including a period as Chief Political Correspondent. He has also presented a range of programmes on history and classical music on BBC Four, BBC Two, Radio 3, Radio 4 and S4C. His recent projects have included major documentaries on David Lloyd George, William Gladstone and Benjamin Disraeli for BBC television.

He is an enthusiastic pianist and organist, and has enjoyed a long association with the renowned Cardiff Singer of the World competition on BBC-2. He has also hosted coverage of the Proms from the Royal Albert Hall.

Huw is an accomplished pianist and is a patron of the National College of Music. He lives in London with his wife and five children.

Huw Edwards is an very experienced conference facilitator, moderator and compere who has hosted many awards dinners and corporate events.

A gifted raconteur, Huw is also popular as an after dinner speaker for a wide range of events where he combines warmth with authority as well as a ready wit and a host of entertaining stories and anecdotes.

As usual Huw was a star and ran the conference perfectly.

Clients often ask about purchasing books for giveaways and delegate packs. Below you’ll find a selection of products by Huw Edwards. Click the images to view on Amazon's website. For bulk orders, please speak with your Booking Agent.

How to book Huw Edwards for your event