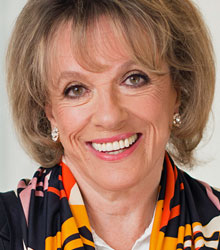 A humorous and fearless public speaker, Dame Esther Rantzen is one of the best-known faces on television. For twenty-one years she produced and hosted That's Life! the most successful consumer programme in the history of television, reaching audiences of over twenty two million viewers a week.

It achieved fame for its talking dogs, Jobsworth Awards and pioneering campaigns on behalf of abused children, organ transplants, safe playgrounds, and to provide justice for consumers. Since then, her campaigns include anti-bullying, awareness of postnatal depression and M.E./C.F.S., working for alienated grandchildren and honours for comedians. She is a Patron of many charities especially those working with children, disabled people and older people.

A former Oxford graduate, Esther's career in journalism began with BBC Radio as a sound effects assistant. From there she moved into television as a researcher/reporter for Braden's Week and then in 1973 as producer/presenter of That's Life which was on air for 21 years.

A creative producer as well as a presenter, she invented the documentary series The Big Time, which discovered Sheena Easton, created the Children of Courage segment of the BBC’s Children in Need and invented the TV show Hearts of Gold which ran for seven years, honouring unsung heroes and heroines.

Esther has made a number of pioneering television programmes on subjects such as British women's experience of childbirth, stillbirth, mental health and child abuse.

In 1986, Dame Esther launched Childline, the free confidential helpline for children and young people, which she chaired for nineteen years. She is currently President of Childline, is a trained volunteer counsellor and was, until recently, a Trustee of the NSPCC. Childline merged with the NSPCC in 2005.

The charity has now helped more than 4 million children and young people, both online and via the telephone. It has been copied in 150 countries around the world. For the first five years, sexual abuse was the most common problem children reported to the helpline. Then for seven years bullying became the most common problem. However, in 2009 the online counselling service was launched, and since then, there has been a huge increase in contacts relating to suicidal thoughts, eating disorders and self-harm.

In 2012, Esther Rantzen then launched a free confidential helpline for older people, The Silver Line Helpline, which provides information, friendship and advice 24 hours a day, every day of the year. The biggest single problem older people disclose is loneliness. Nationally launched in November 2013, it receives around 10,000 calls a week.

In 2008, she took on one of her biggest challenges by appearing on ITV1's I'm a Celebrity, Get Me Out of Here! Other TV appearances include Who Do You Think You Are? (the popular BBC1 genealogy series), Winton's Children (documentary on the work of Sir Nicholas Winton), Would Like To Meet (on dating), How To Have a Good Death (on palliative care), Excuse My French, (learning French), the BBC1 consumer series, Old Dogs, New Tricks, Grumpy Old Women and Strictly Come Dancing on which she lasted three weeks.

In addition to being the first woman to receive the Dimbleby Award from BAFTA she has also received the Royal Television Society's Special Judges Award for Journalism, the Snowdon Award for services to disabled people, six honorary doctorates, an honorary Fellowship from Somerville College, Oxford and a Lifetime Achievement Award from Women in Film and Television.

An award-winning broadcaster and entertainer, Dame Esther Rantzen's audiences invariably respond to the wisdom, experience and humour in her after dinner and keynote speeches.

As her hugely successful broadcasting career demonstrates, Esther is also an authoritative conference host and a revealing interviewer.

Additionally, Esther Rantzen specialises in tailoring her presentation to meet the individual needs of each event.

Preferred Talk Subjects Include:
• Managing Organisational Change
• How to Motivate People
• Creating & Building a Groundbreaking Organisation
• Discovering & Nurturing Talent
• How to Establish Good Relations With The Public & The Media
• Working Women Succeeding in a Challenging World & Juggling a Successful • Career With Family Life
• The lessons of life; Esther's experiences on how, as the widow of award-winning documentary producer Desmond Wilcox to whom she was married for twenty-two years, she watched the creation of many of his most memorable films, notably the story of "The Boy David".

Esther Rantzen was simply wonderful and easy to work with. The feedback has been exceptional, with many guests saying how wonderful it was to hear stories from her incredible time as host of the BBC television series That’s Life, the influence it had and particularly to hear the power of television in campaigning for positive changes in health, which included the campaign for more organ donors, as well as the launch of ChildLine. We were so delighted to have Esther as our after dinner guest.

The feedback received for Dame Esther Rantzen has been tremendous not least because of your personal input, enthusiasm and honesty around some very difficult subjects. Once again thank you for making it a great success and an inspirational event.

Dame Esther Rantzen was brilliant, conducting live interviews on stage with some of the winners, which the audience loved.

Clients often ask about purchasing books for giveaways and delegate packs. Below you’ll find a selection of products by Dame Esther Rantzen DBE. Click the images to view on Amazon's website. For bulk orders, please speak with your Booking Agent.

How to book Dame Esther Rantzen DBE for your event