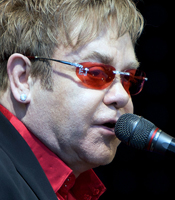 Sir Elton John is one of the top-selling solo artists of all time, with 35 gold and 25 platinum albums, 29 consecutive Top 40 hits and more than 250 million record sales worldwide. He also holds the record for the biggest selling single of all time, “Candle in the Wind ‘97”, which sold 37 million copies. Since his career began in 1969, he has played almost 3,000 concerts worldwide and continues to perform his critically acclaimed “Red Piano” show exclusively at Caesars Palace, Las Vegas.

Elton John's monumental career has spanned more than four decades. The National Academy of Recording Arts and Sciences has awarded him multiple Grammys, including the Grammy Legend Award, as well as honouring him with the Music Cares Person of the Year Award. Additionally, he was the first artist honoured by the US Billboard Touring Conference with their Legend of Live award, which recognises those in the concert business who have made a significant and lasting impact on the industry.

In the early 1990s, Elton John embarked on song writing collaborations with lyricist Tim Rice, resulting in the soundtrack to the Walt Disney Pictures blockbuster The Lion King, for which he won an Academy Award. The album produced two top-selling, award-winning singles for John: “Can You Feel the Love Tonight” and “Circle of Life.” In 1997, The Lion King debuted on Broadway, receiving six Tony Awards, including Best Musical, and in 1998, a Grammy for Best Musical Show Album. In March 2000, the Tony Award-winning Aida opened on Broadway and Elton was honoured with another Grammy for the Best Musical Show Album.

The smash-hit stage production of Billy Elliot, for which Elton John composed the music, garnered him a top-five hit in the UK with the song “Electricity”. Billy Elliot was nominated for a record 9 Oliver Awards, winning Best Musical, among others.

In December of 2004, Elton John received the Kennedy Center Honour for his lifetime contributions to American culture and excellence through the performing arts. In 1998, he was knighted by HM The Queen for services to the music industry.

Clients often ask about purchasing books for giveaways and delegate packs. Below you’ll find a selection of products by Sir Elton John CBE. Click the images to view on Amazon's website. For bulk orders, please speak with your Booking Agent.