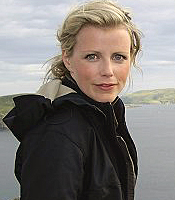 Ellie Harrison is a geographer and ecologist known for her work presenting wildlife and natural science programmes for BBC1, Channel Five and Discovery. She has travelled to Namibia, South Africa, Australia, New Zealand and Indonesia to film wildlife for a series - Michaela's Wild Challenge - which earned a BAFTA in 2005.

More recently Ellie has travelled throughout the UK to film wildlife spectacles for BBC1's The ONE Show. She currently presents for BBC1 Countryfile and and Discovery U.S.; writes for Countryfile Magazine and fronts BTCV's Spring Into Action campaign.

Ellie Harrison grew up in living off the land in rural Gloucestershire, where the family grew their own fruit, vegetables and kept chickens. During her early travels she worked on a farm in Zimbabwe, canoed unguided on Lake Kariba and camped under the dam taking portrait photographs.

She spent many wildlife watching trips in both Zimbabwe and Canada before returning to the UK to study for a degree at King's College, London, specialising in biogeography and third world political ecology, and winning a scholarship to travel to Zimbabwe for her thesis on conservation development and elephant management.

Graduating with BA in Ecology and Geography, to support herself whilst contemplating a career in country music, Ellie undertook a series of temporary jobs, ending up as a secretary at Channel 5. Whilst with the network Ellie was selected from a shortlist of potential candidates to host the children's show Milkshake!, however she turned the offer down.

A year later was chosen to fill in for Michaela Strachan's maternity leave, presenting Michaela's Wild Challenge for over a year, during which time the show won a children's BAFTA. Following this, Ellie became a freelance television presenter, presenting on the BBC, ITV, Channel 4, Channel 5 and the Discovery Channel.

We could not be more thankful for all that Ellie contributed to our Graduation day.  She engaged in all that we threw at her; with our other Dignitaries, our staff and especially our students.  Her speech at the ceremony reached out to the whole congregation, highlighting the support of the parents and sharing her own experiences with our students.  Nothing was too much for her and we are even more grateful for her patience and in giving more of her own time so we could photograph her at the college.

How to book Ellie Harrison for your event