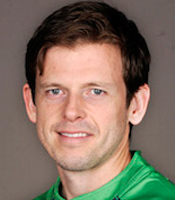 An Irishman who could one day play for England, Ed Joyce has been an important part of Middlesex's middle-order since his debut in 1999.

A left-handed batsman standing at 5ft 11ins, Joyce scored has scored consistently for Middlesex, and was rewarded with the captaincy in June 2004 after Owais Shah was relieved of the post due to disappointing results.

Born in Dublin, and from a large family with four brothers and four sisters, Joyce has also played for Ireland and qualified to play for England in 2005.

How to book Ed Joyce for your event