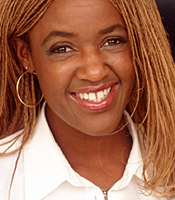 Once described as a 'presenter across boundaries', Diane Louise Jordan has worked on programmes as diverse as Dream Ticket, Bright Sparks, All That Matters and Songs of Praise. For over six years, she was a presenter on the long-running BBC ONE children's programme Blue Peter.

Diane has worked on several special broadcasts including "Diana, One Year On", which included an exclusive interview with the late Princess' mother, The Hon Frances Shand Kydd. More recently, she presented a poignant Songs Of Praise from New York in the wake of September 11th. She also holds a unique Songs of Praise record for 45 minutes of non-stop jiving for the camera on a weekday morning.

Diane Louise Jordan is a motivational speaker who is enthusiastically received on the corporate market and has published a book entitled "How To Succeed As a Single Parent" and also owns her own property business.

Diane has a degree in Theatre Arts and spent six years on the road touring with theatre companies and appearing in plays such as Pygmalion and A Midsummer Night's Dream.

She devotes many tireless hours to her charities, all of which reflect issues close to her heart. She is Vice-President of NCH Action Trust for Children and Patron of many other organisations including The Oasis Trust, Mildmay Hospital and Jeans For Genes.

Diane Louise Jordan's wide-ranging appeal was a deciding factor in former Chancellor Gordon Brown's invitation for her to sit on the Diana, Princess of Wales Memorial Committee - the only TV celebrity asked to do so. She is also very proud to be one of the trustees for the BBC's long running Children In Need Appeal.

Clients often ask about purchasing books for giveaways and delegate packs. Below you’ll find a selection of products by Diane Louise Jordan. Click the images to view on Amazon's website. For bulk orders, please speak with your Booking Agent.