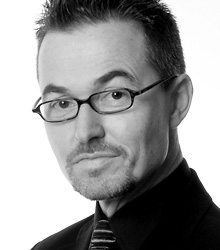 David Lewis is a professional cartoonist and caricaturist, with over twenty years experience within the corporate sector. Based in London, he is also experienced in television work, most notably as the designer and cartoon artist for ITV's award-winning 90s animated topical satire show 2DTV.

David graduated from St. John's College, Oxford University with a First in English Literature in 1989. Since then, he has become one of London's most successful corporate entertainers and has also built up a broad portfolio of cartooning work, specialising in the business sector; specifically corporate visualisation, brainstorming and graphic recording. He has a long-term association with Trompenaars Hampden-Turner and has illustrated all their books and many of their workshops since the 1990s.

David illustrates for a broad range of clients, working both within the UK and internationally. His work includes portraiture, book and magazine illustration, Christmas cards, advertising commissions and corporate gifts. His cartoons have been published in The Beano, The Sunday Times and The Daily Mirror.

His television credits include The One Show, Come Dine With Me, CBBC, Jack Dee’s Happy Hour, Horrible Histories, Wogan’s Web and the aforementioned 2DTV through all of its series; subsequently he worked with the 2DTV team on George Michael’s video ‘Shoot the Dog’.

David’s many satisfied clients include Her Majesty the Queen (for her 80th birthday celebrations), Sir Richard Branson, Bruce Forsyth, the Economist magazine and many large corporations ranging from Goldman Sachs to Vodafone. He has recently been involved in many corporate brainstorming workshops including for British Aerospace and the Department of Health.

In the course of his career David Lewis has drawn well over 250,000 guests at parties, exhibitions, functions and trade shows. His work has spanned four continents: from Detroit to Jaipur, from Manchester to Marrakech.

Private & Corporate Parties
David Lewis’ talent as an on-the-spot caricaturist is hugely popular and in-demand at a wide range of parties and events. Whether you are hosting a corporate function, birthday celebration, a wedding or bar mitzvah, you can be certain that David will keep your guests amazed and delighted.

David’s speed of execution (2-3 minutes per picture), immaculate presentation and gentle humour make him an invaluable addition at any event. What marks out David’s work is his ability to capture the unique essence of an individual in a manner that is at once amusing and sympathetic.

In the course of his career David Lewis has drawn approximately one hundred thousand caricatures. He has entertained at royal events, celebrity bashes, golf days, office parties, themed evenings and even at 35,000 feet! Whether he is drawing the company Chairman, the important client or the mother-of-the-bride, you can be sure that your guests will depart with a treasured and permanent reminder of your hospitality


Commercial Visualising and Graphic Facilitation
Cartoons and visualisations can be key elements of any business meeting including focus group feedback, 360 degree peer evaluation and strategic planning. Delegates are delighted to see the words they say emerge as pictures before their eyes. This validates their ideas and builds group confidence and coherence.

David Lewis has wide experience in corporate visualisations, brainstorming and graphic facilitation. His clients value his unique ability to convey complex business ideas in a striking visual medium. He is particularly attentive to the mood of a meeting and to any strongly insightful, unusual or colourful perspective that anyone in the room, even the quietest person, may bring. Individuals may use David’s images in presentations to their colleagues. Equally, if he is briefed to do so, David can challenge certain ideas through his images, enabling new perspectives to emerge.

David’s broad cultural references and wide reading enable him to give gentle prompts to delegates if they are not stretching themselves.

David Lewis was totally charming and a consummate professional. He was cheerful, funny and everyone loved him and his work. It really made the party. Thank you also for recommending Charles Burns. He too was a superb addition to our party and together they were the making of it. I cannot thank you enough for this wonderful suggestion. I will be turning to you next year for more new an innovative ideas – so get your thinking cap on!

Just to say thank you for helping to make Sunday such a wonderful evening for us. Your cartoons were an absolute hit, as I think you could tell on the night! Not only were many of our guests keen to have their cartoons done, but they were also fascinated to watch you at work on other people.

How to book David Lewis for your event