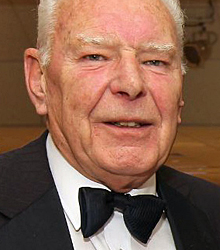 One of the most sought after and funniest after dinner speakers in the UK, Dave Gunson was born in Yorkshire and started his working life in a Sheffield steel mill. His ambition to fly was restricted by the poor visibility in the rolling mills so he decided to join the Royal Air Force, where he flew Shackletons in Coastal Command for twelve years.

His love of flying continued into his civilian life where he became an Air Traffic Controller at Birmingham Airport, which is where all the fun started. During his career he talked down aircraft for twenty-three years, and as Dave used to say "my aim is to stick at the job 'till I get it right!"

Dave's smooth approach and impeccable timing does nothing to allay the fears of frequent flyers, leaving them with the nagging doubt that it's all true.

His brilliantly funny presentation entitled 'Flight Plan' and the hilarious stories based around his experiences in the job, have been captured on record and tape, entitled 'What Goes Up Must Come Down'.

David Gunson is a former American Express After Dinner Speaker of the Year and he has spoken for most of the top companies in the country.

How to book David Gunson for your event

The man from the coal board

The man from the coal board