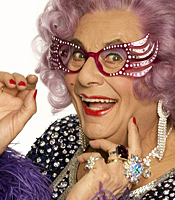 Barry Humphries, creator of Dame Edna Everage, is first and foremost a comedian and satirist - one of the funniest and most loved performers Australia has produced. He has been a part of our cultural landscape for over 50 years and has captured the hearts of millions of people from all around the world.

Barry Humphries was born in suburban Melbourne in 1934. From a young age he used to spend hours dressing up and inventing his own characters. School was not a totally enjoyable experience - 'It was quite hard teaching me because I interrupted a lot and didn't always do my homework' - and comedy became a means of expressing himself and achieving acceptance among his peers.

Barry went to London in his early twenties and became serious about acting. In London he wrote a comic strip about the adventures of an Australian bloke called Barry Mackenzie, which was made into a movie, also starring Mrs Edna Everage. His reputation as an actor and writer has grown ever since.

His most famous and enduring creation was Melbourne housewife, Dame Edna Everage. It was Dame Edna - internationally celebrated Megastar - who achieved worldwide fame for both herself and her creator. Her greeting to adoring audiences - 'Hello possums!' - is now a part of the lexicon.

Barry Humphries has regularly updated Edna, originally a drab Melbourne, Australia housewife satirising the conservatism of Australian suburbia, the character adopted an increasingly outlandish wardrobe after being performed in London in the 1960s, and grew in stature and popularity.

Following film appearances and an elevation to damehood in the 1970s, the character evolved to "Housewife and Superstar", then "Megastar" and finally "Gigastar". She came into her own during the 1980s when the often brutal policies of Thatcherism--the "vindictive style of the times" - allowed Dame Edna to sharpen her observations accordingly.

Throughout the 1980s and 1990s Dame Edna became increasingly known and popular in the USA after multiple stage and television appearances.
Edna describes her chat-shows as "an intimate conversation between two friends, one of whom is a lot more interesting than the other" (by which she means herself). The character has been used to satirise the cult of celebrity, class snobbery, and prudishness. Her larger-than-life persona and scathing but dead-on commentary on society and celebrity-hood, as well as her habit of treating celebrities like ordinary people (on her TV shows) and ordinary people like celebrities (in her stage shows) have become signatures.

Dame Edna is praised for her insights into her homeland. When asked why Australians are so good at sport she commented "Good food and diet; open air life; juicy steaks; sunshine -- and the total absence of any kind of intellectual distraction".

During 2001 and 2002, Dame Edna appeared in the fifth season of the television show Ally McBeal playing the guest role of Claire Otoms, a client of the show's law firm who later became a secretary at the same firm. Claire Otoms is an anagram of "A Sitcom Role".

Dame Edna appeared at the Queen's Golden Jubilee Concert, the "Party at the Palace" in London in 2002, where she referred to the Queen as the "jubilee girl".