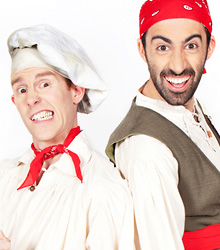 Book Cook and Line
add to shortlist
About

Cook and Line from CBeebies' Swashbuckle perform a rip-roaring pirate adventure! Full of lively songs, crowd-pleasing games and laugh-out loud comedy, their energetic and interactive performance will be loved by both their young fans and the whole family.

Swashbuckle has taken CBeebies by storm. It consistently gets some of the highest ratings on children’s TV and has consequently been sold worldwide. The success of the BAFTA-winning show has lead Cook and Line to be featured faces on the channel, with stand-out appearances in five CBeebies pantomimes (A Christmas Carol, Peter Pan, Alice in Wonderland, The Nutcracker and The Snow Queen), as well as CBeebies’ A Midsummer Night’s Dream, gaining their own monthly Swashbuckle magazine, presenting the channel’s links and headlining numerous festivals. Any parent with a young child will be used to watching the slapstick antics of Joseph and Richard. The pair have a unique comedy chemistry and would be a massive draw to the many hundreds of thousands of Swashbuckle fans throughout the country.

Cook and Line are Joseph Elliott and Richard David-Caine. They have performed together for over 10 years and recently released their own CBBC comedy show, InterNOT. Richard is also well known for his work on other CBBC BAFTA-winning shows, Class Dismissed and Horrible Histories.

Thanks to Richard and Joseph for their Main Stage performance and the meet and greet in the Big Top – both were a hit with all our smaller festival goers!

Cook and Line from CBeebies' Swashbuckle performed at our Waitrose Summer Festival 2017 and were a fantastic draw for our family audience. On the day they were a pleasure to work with and the audience loved them! We had some brilliant customer feedback with Swashbuckle being the highlight of their day.

How to book Cook and Line for your event

Tags for Cook and Line