Travel and fashion television presenter and Miss World Runner up 1992 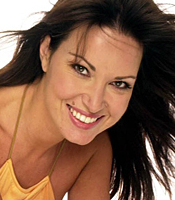 After a successful international career in fashion one of Claire Smith's earliest television presentation roles was for Meridian's 'Knight Riders' series. This role included a motorcycle tour of the historic Ridgeway, (Claire is an accomplished bike rider), with Midge Ure, (Band Aid etc).

Claire appeared as co-presenter of 'Steve Wright's People' on BBC One and was retained for 6 programmes.

Following on from success in commercial work BSkyB hired Claire Smith for the 'Sky Travel' show. This project extended to 3 years work and amounted to Claire presenting over 100 programmes from around the world.

Claire presented 'A Close Guide To...' on Discovery Home & Leisure , which took her to diverse locations like the set of C4's Brookside.

To expand her horizons Claire took a Guildhall School of Drama course in music and drama while she continued to appear in commercials and corporate projects.

Claire Smith anchored 24 'British Superbike' programmes for Sky Sports , both live and recorded. Her work was later recognised by the sport' controlling body, who awarded her the accolade of Commentator of the Year at their prestigious end of season ceremony in London.

Claire also presented a 5-hour live angling event, 'Fishomania', for BSkyB Granada Television moved Claire into a reporting role for their regional 'Granada Tonight' news programme, and back onto the travel scene as a presenter in six 'Taste of Travel' programmes. Claire also appeared regularly in Granada's popular 'What's On' entertainment review show.

Claire Smith's recent ventures have included 'CNN Hot Spots' on the CNN Network reaching nearly 300,000,000 viewers around the world, and she co-hosted, along with Jerry Springer, live from South Africa, the 50th Miss World show for ITV2 and the Miss World 'You decide' Programme for ITV1 and ITV2.

How to book Claire Smith for your event