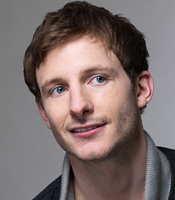 Chris Martin is a keen observer and uses uniquely twisted logic to tackle many ‘earth shattering' problems. He has previously supported Jack Whitehall (2011) and Russell Kane (2012) and Milton Jones on his full tour in 2013.

After performing a sold out run in 2011 at the Edinburgh Fringe Festival of his debut show ‘Chris Martin: No, Not That One', Chris returned to the Fringe in 2012 with ‘Spot The Difference' and in 2013 with his brand new show ‘Passionate about the Pointless' both to critical acclaim.

In April 2014, Chris embarked on a five week run at the New Zealand Comedy Festival before once again taking a brand new solo hour to Edinburgh entitled ‘
Chris is currently on his first solo tour, spanning 18 dates across various venues in the UK.

How to book Chris Martin for your event