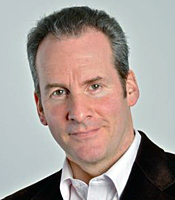 To his legions of fans across the world, Chris Barrie is best known as the hologram Rimmer – the Red Dwarf character who made love only once in his life. To others he is Hilary, Angelina Jolie's butler in Tomb Raider; but to many he will forever be remembered as Gordon Brittas, the most irritating manager in the history of the British leisure centre industry.

Chris Barrie has since added more strings to his bow as presenter of Massive Engines, exploring almost every invention in mechanised transport from trains to airships. As the proud owner of several classic cars, motorcycles and trucks, it played perfectly to one of his biggest obsessions.

After moving to London from his native Northern Ireland, Chris began his show business career as as an impressionist and one of the original Comedy Store Gong Show performers, which led to appearances on the BBCs David Essex Showcase and the Jasper Carrott Election Special of 1983, giving Chris's career the kick start it needed. It wasn't long before he was picked up by the producers of Spitting Image, and he went on to provide the voices for a stream of characters from HRH Prince Charles to Paul Daniels.

His early television and radio experience includes a series of On the Fringe for HTV, Stomping on the Cat and Pajamarama for LWT, 6.55 Special on BBC2 with Emma Thompson, The Russell Harty Show for BBC 1 as well as Weekending, Son of Cliché and The Uncyclopaedia of Rock for Radio.

Other acting roles include the part of Alexander Pope in the Channel 4 production of Handel: Honour, Profit and Pleasure, Zastrozzi, televised in April 1986 and a lead role in Plague of Goodness, the controversial Radio 4 Monday Play. His cameo appearances include the Lenny Henry Show, Happy Families and Blackadder III. In Spring 1990 Chris played the lead part in a national tour of the farce, Totally Foxed.

Chris lives in Berkshire, England, with his wife Alecks.

For over thirty years Chris Barrie has been very active on the corporate entertainment scene. Whether he is hosting an awards ceremony, linking conference presentations, contributing to the launch of a new product or delivering an after-dinner speech, he will provide the right balance of entertainment for the company and the event.

In recent years Chris has hosted the Network Rail Awards, the Utility Industry Achievement Awards, the Specialists in Construction Awards, to name but a few. He has worked for a diverse range of clients including Mercedes-Benz, Computer Associates, Vodafone and MFI.

Absolutely outstanding. A total professional, Chris kept our audience entertained throughout the Awards Dinner. A pleasure to work with and highly recommended.

I would like to say a huge thank you for last night, we have had fantastic feedback on Chris from the people attending the event. He was a real pleasure to deal with and very professional. He really made the night and we hope that he enjoyed the evening. More importantly he really got the attendees involved in the evening, which was our main aim. He made his material relevant to our sector, his onstage banter with some of the award presenters was also fantastic. The guests really found him approachable and I know he was very busy talking to fans after the event finished, so the time he gave for this is also very much appreciated. I cannot speak highly enough he was an absolute dream host.

Thank you so much for being our celebrity on Saturday at the Formula Dremel Challenge at Silverstone. We have had great feedback from the families who attended and are very grateful to you for the 'star quality' that you brought to the event. We all really enjoyed your Murray Walker impression and the kids and Dads loved meeting you.

What a star this man is! He is professional and extremely funny, he had the audience falling off their seats with laughter. He is also fab at working the room and chatting to sponsors and guests. I would strongly recommend him.

How to book Chris Barrie for your event