TV presenter (Love Island, I'm a Celebrity, Get me out of Here! Now) 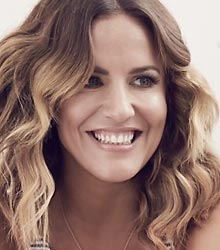 Caroline Flack is one of the UK’s most established presenters with a wealth of experience under her belt plus a Strictly Come Dancing glitterball. Her live experience as a presenter has seen her recently host ITV’s juggernaut X Factor and Love Island.

Caroline started her career playing Bubbles on sketch show Bo’ Selecta in 2002. From here she moved on to presenting the “International Pepsi Chart Show” and “The Games: Live at Trackside.” Children’s TV beckoned next as she appeared on TMI and the Escape From Scorpion Island, both for the BBC. This then led on to Caroline hosting CBBC’s coverage for Comic Relief Does Fame Academy, followed by the semi-final coverage of The Eurovision Song Contest.

In 2009 Caroline hosted the second series of Sky 1’s Gladiators with Ian Wright and that same year, alongside Joe Swash, she became the new face of ITV2’s Im a Celebrity, Get me Out of Here…NOW which was a role she held until 2010.

The Xtra Factor was next on her list of TV conquests which she hosted in 2011 for three series. And then, in 2014 Caroline was asked to take part in BBC1’s primetime entertainment show, Strictly Come Dancing – from the cha cha to the charleston, Caroline took the ballroom floor by storm and won the series. In fact, Caroline holds the record for the only celebrity to get full marks on a final.
In 2015 she went on tour with Strictly Come Dancing, hosted ITV2’s hit Love Island and ended the year anchoring X Factor. She also released her autobiography Storm in a C Cup.

Caroline has hosted the hugely successful second series of Love Island and has been the face of Speedo’s 2016 Sculpture campaign. She was also the weekend breakfast host of Heart radio in the summer of 2016, and became brand ambassador for skincare giant Cetaphil.

Clients often ask about purchasing books for giveaways and delegate packs. Below you’ll find a selection of products by Caroline Flack. Click the images to view on Amazon's website. For bulk orders, please speak with your Booking Agent.

TV presenter (Love Island, I'm a Celebrity, Get me out of Here! Now)