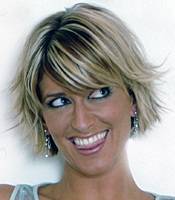 Few broadcasters can make the gear change between entertainment, hard news, personal insights and audience participation as effortlessly and as naturally as Caroline Feraday. Versatility is her strength - from anchoring Sky News to hosting a talk radio phone-in, to sampling chicken's testicles on Channel 4's Heston's Fairytale Feast and a muddy attempt on BBC1's Celebrity Total Wipeout!

Caroline Feraday has been winning over audiences since she joined Capital FM aged just 18. Making her name with six years as the station's "Flying Eye" and building a portfolio of her own shows, Caroline was spotted by BBC Radio Five Live, where she then presented her own programme - “The Juice” – landing big interviews from Victoria Beckham to Michael Moore. The “Weekend News” followed, co-presenting with Matthew Bannister, and the opportunities to broadcast live from the Academy Awards and Edinburgh Festival for Five Live Breakfast.

Caroline was sent to the West Coast of America for GMTV, and presented Celebrity World Cup live on Sky One and co-presented (with Colin Murray) the World Fifpro Awards, interviewing the world's biggest names in football from Ronaldo to Rooney, also on Sky One, and presented music show "Hit for Six" for VH-1. She's also been a regular newspaper reviewer on ITV's This Morning and panellist on C5's Vanessa Show.

LBC 97.3's new Drivetime show launched in 2003 with Caroline Feraday at the helm - and after four years there, she moved from presenting full-time radio to full-time TV - and she joined BBC TV News (BBC1 South East) as a presenter and reporter.

A versatile presenter, pundit and guest, Caroline has appeared on Sky News, GMTV, ITV's This Morning, The Wright Stuff, The Weakest Link and ITV1's The Alan Titchmarsh Show - and many more, and was a judge on Wedding TV's Bride of the Year. She enjoys taking part in celebrity poker shows. Versatile, bright (she's a member of MENSA), accessible and entertaining - Caroline Feraday's as at home interviewing politicians as she is members of the public, a naturally engaging story teller who is at ease on TV and radio.

One of the most sought after voiceover artists in the country, Caroline is the voice of ITV1's Daybreak, Comedy Central's continuity, Chart Show TV - and a host of TV and Radio ads including Citroen, X-Box, Bathstore. As well as music ads for Madonna, Kylie and more under her belt - plus a number of interesting and irreverent documentaries including Back on the Job for ITV (ZigZag) and From Turnip to Swede (Channel 5).

Away from work - music, fitness, films, travel and property are passions and areas of expertise for Caroline. She's toured around Vietnam, Cambodia and South America, owns properties in Europe and Brazil - and has had the opportunity to present a number of travel shows for Sky Travel and The Travel Channel and Thomas Cook TV.

Hardworking Caroline Feraday keeps her energy and fitness levels up with military style boot camp fitness classes and running. A certified Advanced SCUBA diver, who also holds a full motorcycle licence, Caroline ran the London Marathon for Marie Curie, and is certainly someone who rises to a challenge.

Caroline Feraday co-presented our three hour live broadcast of Centrepoint's annual Sleep Out event for Community Channel in November. She brought warmth, intelligence, spontaneity, humour and skill to the show which was made on a shoestring and therefore with few of the props normally available to live broadcasters. Without autocue she dealt with various hiccups in the gallery and unscheduled changes to the running order with total onscreen poise and a smile on her face. I would highly recommend Caroline... She is a delight to work with.

Not only is Caroline an exceptionally fun, witty and friendly live presenter – so much so that Samsung has hired her for three consecutive years – but Caroline has supported Samsung's breast cancer initiatives to the point of diving out of planes for a sponsored parachute jump. She really does throw herself feet first into supporting a cause and her genuine warmth is so well suited to brands and causes that require sensitivity and sparkle at the same time. I would hire Caroline Feraday as a host or presenter for any major event or launch without hesitation. She is always on my guest list for celebrity parties and brand launches that Golden Goose PR throws, because she always brings glamour and positive publicity to any occasion.

has helped in a number of different ways. She always thinks of us and is passionate about us and our 100% Promise so she introduces us to amazing people. This has helped us form some amazing relationships that we are so grateful for. Caroline has a heart to link and connect people and a natural charm and enthusiasm that touches the lives of others.For the last two years, Caroline Feraday has been our main host for our live streamed Global Angel awards that launched in 2011. She was a hugely popular host. Flexible and dynamic. Each time she has gone the extra mile and has delivered amazing results with minimal resources. Caroline has thrived in situations of pressure. Through her engaging presence on stage, I am confident that Caroline encouraged people to give generously and support Global Angels. I recommend Caroline Feraday without reservation and I am delighted to write this testimonial.

How to book Caroline Feraday for your event