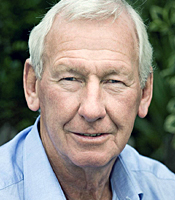 After qualifying as a physical education teacher at Loughborough College he signed for Arsenal in 1963. He was the last amateur to play in the First Division of the Football League. He turned professional in 1964 and made more than 300 first-team appearances, helping the Gunners win the European Fairs Cup in 1970 and one year later the coveted League Championship and FA Cup 'double'. He also became the first English born player to be capped for Scotland.

In 1974 he embarked on a second career in sports journalism for BBC Television. He presented 'Football Focus' for 20 years and was also a regular presenter of, 'Match of the Day', 'Grandstand', 'Sportsnight' and 'Breakfast Sport'. In August 1994 he was lured to the rival channel to be ITV's main football presenter where he worked until 2002.

An FA Full Badge Coach since 1967, he specialised in the coaching of goalkeepers for 28 years and was the first professional goalkeeping coach in the Football League. During that time the goalkeepers at Arsenal, Queens Park Rangers, Southampton, Tottenham and Luton benefited from his training methods. He ran his own Goalkeeping School for youngsters from 1982 until 1995. He coached the keepers at Arsenal including Pat Jennings, David Seaman.

In August 1999 he and his wife Megs launched the Willow Foundation, a charity in memory of their daughter Anna who died in December 1998. The foundation exists to provide special days for seriously ill young adults between the ages 16 to 40. Bob has worked tirelessly as a trustee and fundraiser for the charity and on 1st January 2008 Bob was awarded an OBE for charitable causes in the name of Willow Foundation.

A million thanks for getting Bob Wilson for me – he is a real gentleman and so great with people. He knew heaps about BTUK and was a joy to work with. I am so impressed by him and know that the guests and Moore Stephens were thrilled he was there. I just wanted you to know the event was fab and Bob a real star of the day.

Clients often ask about purchasing books for giveaways and delegate packs. Below you’ll find a selection of products by Bob Wilson OBE. Click the images to view on Amazon's website. For bulk orders, please speak with your Booking Agent.

How to book Bob Wilson OBE for your event