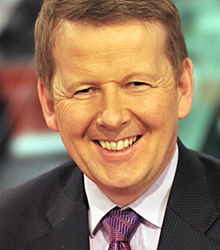 Bill Turnbull is one of the UK’s most popular broadcasters. For more than 15 years Bill has been waking up the country from the BBC Breakfast News sofa, helping it to win four TRIC Awards for Best Daytime Program and take the No 1 spot in the ratings.

In February 2016, Bill left the iconic red sofa behind to present a brand new BBC One daytime quiz, Think Tank. Bill also joined Classic FM in 2016 to host one of their most popular radio shows, hosting the weekend midmorning show.

Previously, he was a stalwart presence on the BBC’s News 24 and Radio Five Live. He’s also presented the One and Six O’Clock News. In 2011 he won the TRIC Award for Best Newscast/Reporter.

As a BBC correspondent, Bill reported from more than 30 countries, including a four-year stint in Washington. He’s covered pretty much everything – from presidential elections to revolutions, Cuba to Chernobyl, hurricanes to Hollywood. However, his favourite story is the feature he made about werewolves in Haiti and living to tell the tale.

More famously, Bill was a contestant on the third series of BBC’s Strictly Come Dancing. His unique “torn-ligament tango” and good-natured sparring with the judges were highlights of this hugely popular programme. Other challenges have included a sleep deprivation experiment for The One show, and winning £150,000 for charity on Who Wants to Be A Millionaire? Bill also survived the spotlight of the famous black leather chair on Celebrity Mastermind, and took part in the BBC’s documentary remake of Around the World in 80 Days. He’s been a guest on a number of BBC programs, including University Challenge, Room 101, The Sarah Millican Show, Would I Lie to You, Pointless, Only Connect, and others.

In his spare time, Bill enjoys the company (and honey) of several hives of bees and the delights of lower league football with Wycombe Wanderers FC.

Clients often ask about purchasing books for giveaways and delegate packs. Below you’ll find a selection of products by Bill Turnbull. Click the images to view on Amazon's website. For bulk orders, please speak with your Booking Agent.

How to book Bill Turnbull for your event