Comedian and master of the ad-lib 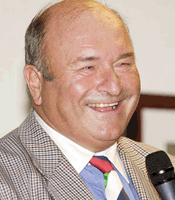 Barry Williams started his working life as an award-winning stand-up comedian and gained two Comedian of the Year awards during his career, the second time being in 1984.

These accolades brought him enormous success and stardom beckoned, however Barry took a change in direction and decided to become a professional after dinner speaker. Barry immediately knew that the after dinner circuit and his style of humour was an ideal match.

Over 20 years has passed and Barry has retained his position as one of the country's premier after dinner speakers. He is equally at home speaking at small gatherings as he is at a large event where his showbiz roots re-emerge and his charm and personality are put to good use.

Still the comedian at heart, Barry can't resist relaying the topical stories of the day at the outset of his speech before moving on to a mixture fictional and true tales, including anecdotes from his days on the road.

Barry Williams thoroughly enjoys his work that over the course of the years has taken him to five continents. He does a lot of work for charities, hosting Gala Events for causes such as the Wooden Spoon Society, the Lords Taverners, the Bobby Moore Fund, Air Ambulance and countless others, especially smaller charities that get no national help.

The after dinner speaker role allows him from time to time to work in one of his favourite environments -the corporate sporting dinner circuit where Barry shares the microphone with many of his heroes who over the years have become good work matesas well asfriends.Ascompere,MC, host, linkmanand chair at conferences,Barry's ability to bring discrete light relief in between the more serious mattersof the day has brought him many accolades.

Barry's alsoin demand for team building events and corporate Golf Days.His trade mark humourand skillful ad-libbingcoupled with years of experience, give him an unparalleled ability to read the room, the occasion andtomakeevery performanceunique.

How to book Barry Williams for your event