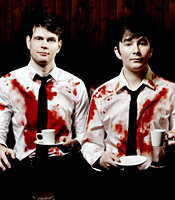 Originally from Aberdeenshire in Scotland the duo made their television debut with the Channel 4 series Magick. Following its success, they went on to host the comedy series, Dirty Tricks, a cutting-edge magic and variety show which was nominated for a Golden Rose at Lucerne in 2006.

They caused a national outcry with their Christmas and Easter TV specials, The Magic of Jesus and Tricks from the Bible in which the pair visited Egypt to walk on water, raise the dead, and even make a real honest-to-goodness virgin pregnant.

They have created a revolutionary new form of magic on the internet for the BBC using the iPlayer, tricks that have racked up millions of hits and had people all over the world and convinced that they had real psychic powers! You can still learn and try these out for yourself here.

In 2009, they won the title of "Best Comedy Illusionists" at the World Magic Awards ceremony in Los Angeles. And in 2011 they starred in the hit BBC prime-time Saturday night show The Magicians a series that regularly drew in audiences of over 6 million people weekly.