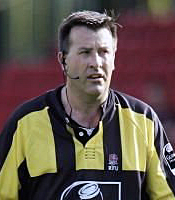 Ashley 'Ash' Rowden is England's most experienced and longest-serving domestic rugby union referee. Over two decades of top class officiating, no other referee in England has officiated at more Premiership matches - or for that matter, sent off more players and put most in the sin bin - Johnson, Dawson, Dallaglio, Guscott, Chilcott, Probyn, Andrew, Healey, Lomu and Richards, etc.

Ash, has a story about all of them, some repeatable others not! He has bridged the era of the old amateur days to the modern ultra professional, whilst still carrying out a daytime profession of running his own transport company.

As a Sales Director by trade, you'll find out why he always had the last word with the players, no matter who they are!

Ash Rowden is an after dinner speaker just as comfortable with mixed as well as all-male audiences. He puts a huge amount of energy, creativity and passion into what he does, working with clients on an individual basis means he can create an event that is truly unique and memorable.

How to book Ash Rowden for your event