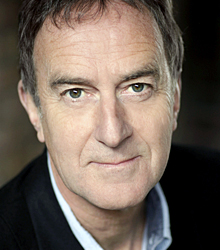 There is simply no escsaping Angus Deayton on British television!

His talents are vast and stretch from the witty, sarcastic and straight-to-the-point hosting/presenting of Have I Got News For You (19 series, BBC2), to his superb acting in One Foot in The Grave (6 series, BBC1). Other TV acting credits include Mr Bean (ITV), Alexei Sayles Stuff (BBC2) and Who Dares Wins (Channel4).