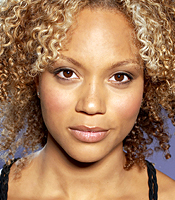 Angela Griffin has been a prominent talent on British TV for over two decades. She rose to fame as hairdresser Fiona Middleton on Coronation Street where she was a regular from 1993 to 1998 before going on to join the original cast of the BBC medical drama series Holby City as Staff Nurse Jasmine Hopkins. Angela has also starred in hit show BBC drama Cutting It and Down to Earth.

In 2001, Angela Griffin presented a programme on Channel 4 about mixed race people in British society. The show included interviews with a large number of well-known British mixed-race people such as Bruce Oldfield and Hanif Kureishi, as well as political figures such as Tony Benn.

Angela Griffin appeared as teacher Kim Campbell opposite former Cutting It co-star Jason Merrells in the BBC drama series Waterloo Road. Angela left at the end of the fifth series to concentrate on her new daytime show on Sky1 called Angela and Friends, a mix of health chat and celebrity gossip. She was joined on the show by her close friends Lisa Faulkner and Nicola Stephenson.

Angela also provides the voice of Amy, the vet in children's television show Postman Pat. In March 2008, Angela appeared on the daytime reality show Murder Most Famous, where, with five other celebrities, she wrote a crime novel, coached by crime writer Minette Walters, the end prize being, having the winning celebrities' novel published. Sadly she did not win!

Angela Griffin appeared in the first two series of Sky TV comedy drama Mount Pleasant and presented Emergency with Angela Griffin on Sky1 which saw her living the life of a paramedic whilst she shadowed the West Ambulance Paramedic service on their day to day work.

In 2012, Angela appeared in the BBC Two show The Great Sport Relief Bake Off and was one of three finalists. Anglea is a self confessed foodie and appeared with Nigel Slater on the second series of A Taste of My Life where the chef explores the life and career of celebrities through some of their favourite dishes.

Returning to stage, Angela Griffin landed the role of Dolly in hit West End show One Man, Two Guvnors in 2013. Since October 2014, she starred as DS Lizzie Maddox in the ITV series Lewis and in January 2015 co-hosted the ITV show Pets: Slimmer of the Year.

In her year out of the limelight, Angela Griffin set up production company Mulberry Films with former Waterloo Road producer Sharon Hughff.

How to book Angela Griffin for your event