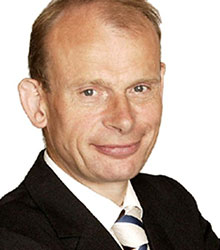 Andrew Marr is the host of BBC1's Sunday AM on BBC ONE, the agenda-setting interview programme. He moved to the programme after a five-year stint as Political Editor at BBC News.

He was named Journalist of the Year in the Creative Freedom Awards 2000 and received the Journalist Award in the Channel 4 Political Awards of 2001.

Andrew was named as the best individual contributor on television at the Voice Of The Listener And Viewer's Annual awards in 2002. He won the Royal Television Society Television Journalism Award in 2001 for specialist journalism on the BBC Ten O'Clock News. In 2004, Andrew received the Richard Dimbleby Award at the Bafta Television Awards.

Andrew lists his hobbies as reading (he was the chair of judges, Samuel Johnson Prize, 2001), painting, cooking and remembering his children's names.

Clients often ask about purchasing books for giveaways and delegate packs. Below you’ll find a selection of products by Andrew Marr. Click the images to view on Amazon's website. For bulk orders, please speak with your Booking Agent.

How to book Andrew Marr for your event