Awards Hosts & PresentersCulture and The Arts 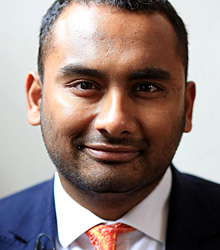 Awards Hosts & PresentersCulture and The Arts

Amol Rajan is the BBC's first ever Media Editor, covering the global impact of the rapidly changing media landscape across politics, business and culture for the BBC's biggest outputs. Amol has also presented the ‘The One Show’ for BBC 1 and is a regular presenter on Radio 2, on both ‘The Jeremy Vine Show’ and ‘Drivetime’.

Born in India, Amol moved to London when he was three and grew up in Tooting, South London. He read English at Downing College, University of Cambridge, during which time he edited Varsity, the student newspaper. At the age of 18, Amol spent a gap year in the UK Foreign and Commonwealth Office (FCO).

Before joining the BBC, Amol Rajan was Editor of The Independent and was instrumental in assisting facilitate the successful transition from print to electronic media. When appointed to the role in June 2013, aged 29, he was both the youngest ever Editor of a British broadsheet title, and the first non-white Editor in Fleet Street history.

He hosted a weekly interview show on London Live called 'The Headline Interview', in which he spoke one to-one with influential Londoners including Boris Johnson, Chuka Umunna, Sadiq Khan, Sharon Shoesmith, Prue Leith, and Peter Bazalgette. As a prolific writer across a range of subjects, he wrote a weekly column in the Evening Standard, was restaurant critic for The Independent on Sunday for 6 years, and still writes regularly for publications such as GQ, Politico Europe, The Spectator and the New Statesman.

His regular TV appearances in recent years have included Question Time, Masterchef, Great British Menu, Newsnight, The Daily Politics, The Andrew Marr Show, and Lorraine. Before joining The Independent, he spent two years on-screen as the 'mic boy' on Channel 5's The Wright Stuff, to which he recently returned as a panellist.

In his spare time, Amol Rajan is a keen cricket enthusiast and plays for the Authors XI cricket team and he combined his interest in cricket with his desire to write with his first book, ‘Twirlymen, the Unlikely History of Cricket's Greatest Spin Bowlers’, which was published by Random House in 2011.

Clients often ask about purchasing books for giveaways and delegate packs. Below you’ll find a selection of products by Amol Rajan. Click the images to view on Amazon's website. For bulk orders, please speak with your Booking Agent.

How to book Amol Rajan for your event

BBC Arts Editor and former Director of the Tate Gallery

BBC Arts Editor and former Director of the Tate Gallery