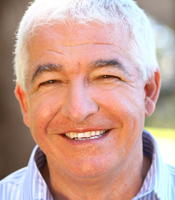 Allan Pease researches and studies the psychology of selling, relationships and human communication. He teaches simple, field-tested skills and techniques that get results. And he delivers his message in a humorous way, which motivates people to want to use these ideas immediately.

Allan takes you through powerful communication techniques and teaches you how to decode other people's behaviour - and what to do about it. He also reveals how to decode a wide range of subtle clues that appear in meetings, phone calls, negotiations and face-to-face encounters.

Known worldwide as “Mr Body Language”, Allan's own record in the field of selling, motivating and training is equalled by few others. He is a born achiever, starting his career at age 10 selling rubber sponges door to door. At 17, he was the No.1 national salesman for a company selling bed linen, pots & pans. At 21, he was the youngest person ever to sell over $1,000,000 of life insurance in his first sales year and qualify for the Million Dollar Round Table.

He has addressed audiences in 70 countries, and his programs are used by businesses and governments to teach powerful relationship skills. His messages are relevant to any area of life that involves winning people over and getting them to like you, co-operate, follow you or to say 'yes'.

Allan – with co-author Barbara Pease - is one of the world's most successful non-fiction authors, writing 18 bestsellers including 10 number 1 bestsellers such as The Definitive Book of Body Language and Why Men Don't Listen and Women Can't Read Maps. His books have been translated into 54 languages and have sold over 27,000,000 legal copies. His television series and #1 Box Office Movie were watched by over 100 million viewers.

Allan Pease’s presentations can include the following topics. Importantly, Allan will speak with you personally prior to the event so that he can tailor his presentation around your audience and your goals for the day.

Body Language – It's Not What You Say:
- How to spot if someone is lying or hedging
- Sales and negotiation - reading across the table
- How to develop instant rapport and get co-operation
- How to read between the lines of what is said
- Why men should never lie to a woman

How To Be A People Magnet:
- How to make powerful lasting first impressions
- How to effortlessly turn any situation to your favour o How to be a great conversationalist
- How to make others feel important
- How to become a 'human magnet'

Questions Are The Answers:
- How to get interest and keep attention
- How to motivate others to WANT to join your cause
- How to give powerful presentations
- Why the law of averages always works
- The 5 Solid Gold Questions that never fail

Also, be one of the first to hear Allan’s much-anticipated new topic based on his new book:

The Keys To Success

We all want to be successful in our lives, but when hard times strike (and inevitably they do) how do we not just overcome them, but thrive? How do we take a challenge and turn it into triumph? How do we stay motivated, positive, and at the top of our game?

In Allan's brand new conference topic, your audience will learn exactly how to achieve what they've always wanted!

Your audience will learn:
- How to decide what you really want and how to get it
- How to set goals to achieve what you want
- The RAS - the brain system that takes you where you want to go
- How to overcome obstacles in your life
- How to turn challenges into opportunities
- How to come back from adversity
- How to maintain positivity, good health, and humour for your entire life!

Our 6000 members have grown because of Allan Pease's message and experience for a second time.

We had a major Awards Dinner and couldn't decide between a comedian or a credible, intelligent after-dinner speaker. With Allan Pease, we got both.

At Dormers Business Briefings we wanted a high calibre speaker with the professionalism and ability to be inspirational at the same time. Allan Pease was that speaker!

Allan's perceptive and memorable presentation achieved the balance of being informative and highly entertaining in the area of human relationships and gave delegates the opportunity to both learn and relax at the end of a demanding day.

Wow, what a night! The evening was more successful than I could have hoped for.

At the National, our values include 'quality in everything we do' and 'professionalism and ethics in all our actions.' We look for the same values in our business partners and you certainly exceeded our expectations.

Allan Pease is a great communicator and a wonderful entertainer. Many of our delegates have told me they didn't want him to finish.

How to book Allan Pease for your event