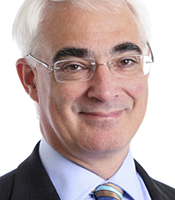 The Rt Hon Alistair Darling MP has been a Member of Parliament since 1987 and represents the Edinburgh South West Constituency. He served as Chancellor of the Exchequer from 2007 to 2010 during the worst global financial crisis since the 1930's Great Depression.

After he completed the Loretto School, Musselburgh, he was admitted to the University of Aberdeen where he graduated in 1976. In 1978, he became a solicitor and in 1984, he was admitted to the Faculty of Advocates (a body of independent lawyers who practise law as Advocates before the Courts of Scotland). Darling entered politics in 1982 when he was elected Councillor to the Lothian Regional Council and served as Chairman of the Transport Committee from 1986 to 1987. In 1987, Darling was elected as Member of Parliament for Edinburgh Central and has been elected ever since until 2005 when the Edinburgh Central was abolished. Since 2005, he is Member of Parliament for Edinburgh South West.

Following the General Election in May 2010, where he increased his majority, Alistair Darling announced his intention to step back from front line politics after 23 years on the front bench and to return to the back benches from where he would continue to serve his constituents in Edinburgh.

In 2011, he published his memoirs of the time he was Chancellor of the Exchequer titled Back from the Brink: 1,000 Days at Number 11. The book mainly deals with the government's response to the financial crisis but it also reveals a lot about the atmosphere in the Labour Party under Gordon Brown.

Alistair is currently Chair of the Better Together Campaign which is a cross-party campaign that promotes the view that Scotland is a better and stronger country as part of the United Kingdom. He divides his time between Edinburgh and London.

Clients often ask about purchasing books for giveaways and delegate packs. Below you’ll find a selection of products by Rt Hon Alistair Darling. Click the images to view on Amazon's website. For bulk orders, please speak with your Booking Agent.

How to book Rt Hon Alistair Darling for your event