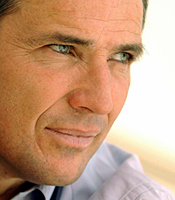 With a collection of major honours to his credit, Alan Hansen is one of the most successful British footballers of all time.

He is the only person to have won all of the honours available at club level at least twice and captained the Liverpool side to historic double in 1986.

A knee injury ended his playing career in 1991 and Alan Hansen went on to make a name for himself at Sky as a football analyst. In '92 Alan joined the Match of the Day team and his keen tactical understanding of the game made him the face of the BBC's flagship programme alongside Gary Lineker.

Alan has established a reputation as an exceptional motivational and after dinner speaker. As well as playing golf (handicap of 4), his interests include tennis and the theatre. Alan Hansen lives in Southport with his wife and two children.

Alan's speech was intelligent, vibrant and good fun, delivered in a relaxed style. He later made himself available to speak with guests - very professional.

The feedback from Alan's speech has been excellent, even from people who are not 'into football' in a big way. His anecdotes were exactly the right blend of humour and team-building messages that could be appreciated by the whole audience.

Clients often ask about purchasing books for giveaways and delegate packs. Below you’ll find a selection of products by Alan Hansen. Click the images to view on Amazon's website. For bulk orders, please speak with your Booking Agent.

How to book Alan Hansen for your event