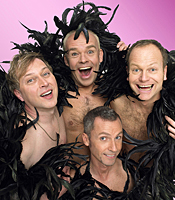 Book 4 Poofs & A Piano
add to shortlist
About

Described as 'more hairdresser than barbershop', this self-explanatory ensemble first performed at Soho's exclusive moving-shaking-first-adopting media-hothouse drinking-hole The Groucho, back in mid-2000. In 2001 the boys were spotted by the producers of 'Friday Night with Jonathan Ross' and were invited to become the resident band.

As a result they have provided musical introductions for such esteemed pop luminaries as ELTON JOHN, PAUL MACARTNEY, LIZA MINNELLI and KYLIE MINOGUE to name a few. A recent episode was dedicated to the diva of pop MADONNA and their dragged up performance and tribute to the star led to a whirlwind of gigs including the launch of the ROD STEWART musical "Tonight's the Night".

4 Poofs & A Piano are an extremely versatile and hugely entertaining act and would make a wonderful addition to any event, bringing audiences both comedy and cabaret style music with style, energy and panache.

Their act can be tailor made to meet your demands; they can provide either a full cabaret set or simply a musical opener/finale to give your event a bit of sparkle. The boys can present a comedic act for the more captive audience or indeed a dance set for a party environment.

They can, of course, provide their trademark musical walk-ons for guest speakers and award winners but can also write bespoke material for an event to give originality and a more personalised feel to the event.

4 Poofs & A Piano are a lively and exciting alternative to conventional corporate entertainment and with their charm and flair they will help make any event a success.

How to book 4 Poofs & A Piano for your event